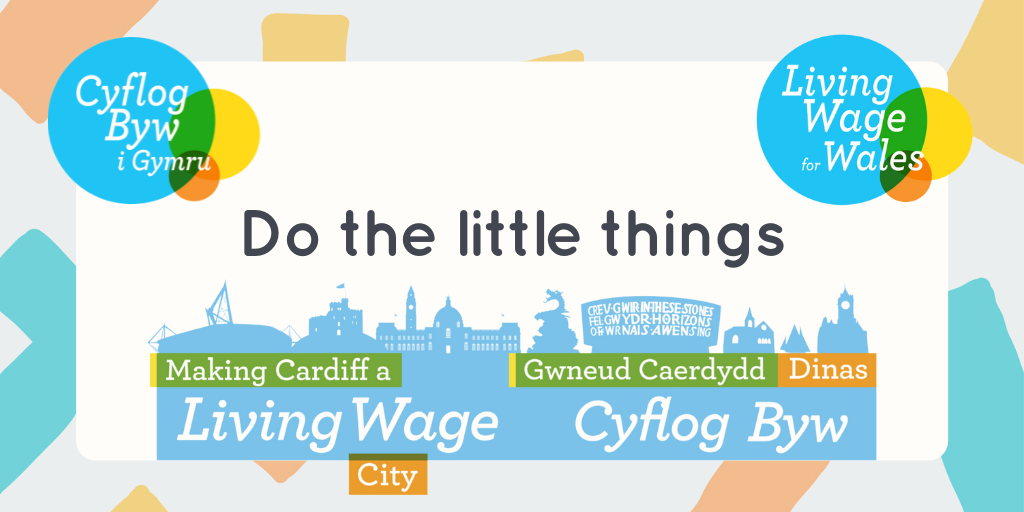 St David's last words were ‘do the little things’, the well-known maxim in Wales. This St David’s Day, employers across the Capital are being asked to think about the things they can do to join over 160 organisations in making Cardiff a Living Wage City.

Even small steps towards becoming an accredited Living Wage employer will make a big collective difference to the estimated 24,000 people in Cardiff who are not paid a real Living Wage.

‘Little things’ might be finding out more about the real Living Wage in Wales, reading the latest updates on Welsh Government’s commitments, reading about what it means for employers and workers, registering interest in becoming accredited or understanding the support available from Cardiff Council.

In 2019, Cardiff became the first Capital City in the UK to be recognised as a Living Wage City. Led by Cardiff Council, Citizens Cymru, Cardiff University and other Living Wage Champions, three-year targets were set with the aim of increasing the number of workers uplifted to a real Living Wage to over 6,500 (from a baseline of 4,500).

Despite this progress, 13 percent of households in Cardiff are living in poverty and 24,000 people (11.6% of all jobs) are not paid a real Living Wage.

As the costs of food and energy continue to rise, people living in Cardiff should be able to live and not just survive. That’s why the team behind Making Cardiff a Living Wage City has set new three-year targets to take the total number of people uplifted to at least 11,000 by April 2024 (from a total of 7,949 at the end of December 2021).

In November 2021 the First Minister, Mark Drakeford said in support of the Living Wage:

Cynnal Cymru is the Living Wage Foundation’s accreditation partner in Wales. It supports organisations from across Wales with the process of accreditation and works to promote the real Living Wage and communicate benefits for employers and employees.

What is the real Living Wage?

The real Living Wage is an hourly rate of pay set independently and updated annually (not the UK government’s National Living Wage). It is calculated according to the basic cost of living in the UK, and employers choose to pay the Living Wage on a voluntary basis. According to the Living Wage Foundation, since 2011 the campaign has impacted over 300,000 employees and delivered over £1.6bn extra to some of the lowest paid workers in the UK.

About the Living Wage Foundation

The Living Wage Foundation is the institution at the heart of the independent movement of businesses, organisations and people who believe that a hard day’s work should mean a fair day’s pay. We recognise and celebrate the leadership shown by the nearly 9,000 Living Wage Employers across the UK who voluntarily commit to ensure their staff earn a real Living Wage that meets the cost of living. We are an initiative of Citizens UK.