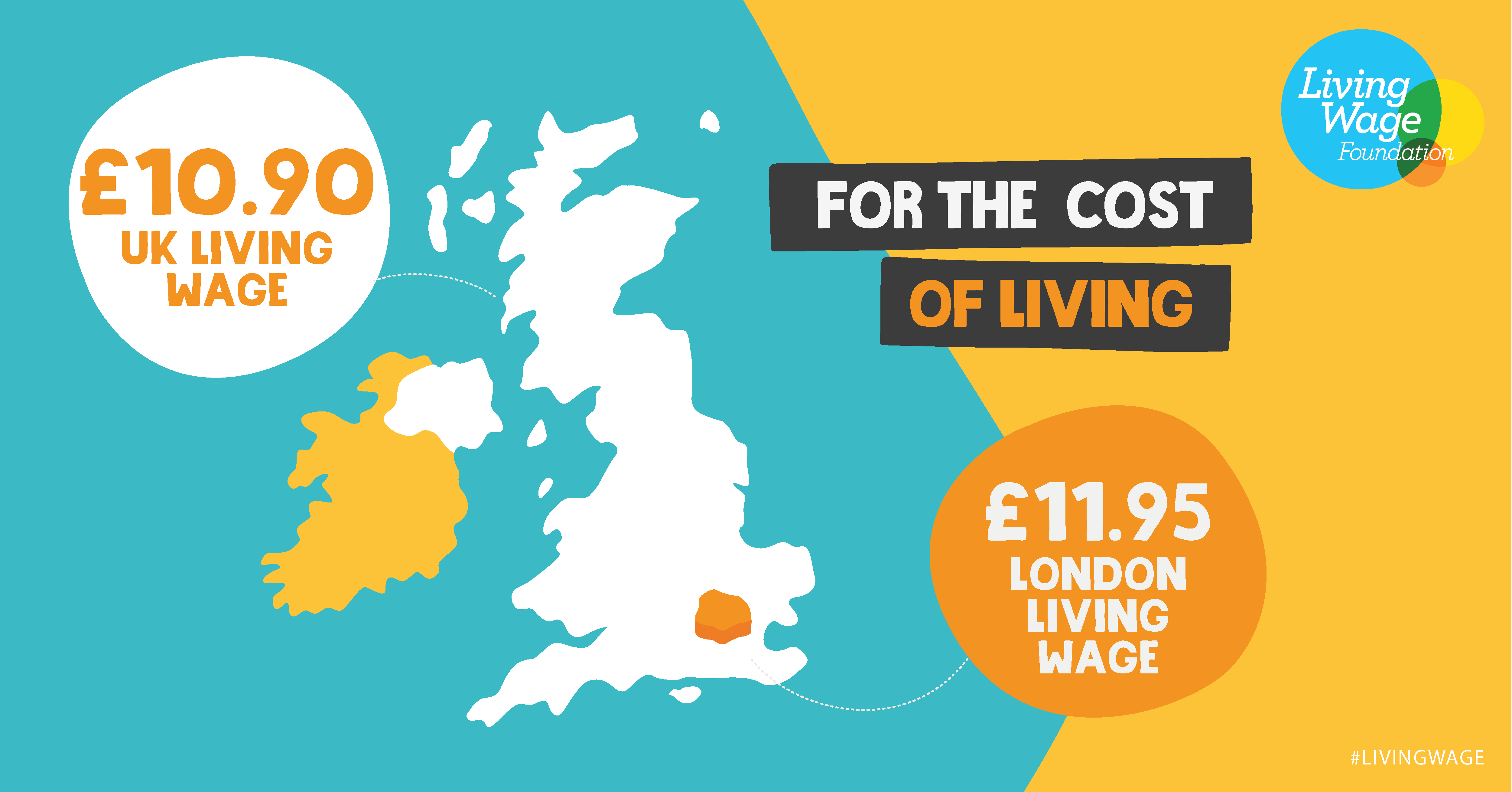 Over 18,000 Welsh workers will receive a vital cost-of-living pay boost thanks to the almost 500 Welsh employers, including Redrow Homes plc, Wales Millennium Centre and Burns Pet Food, who are all committed to paying all their staff a real Living Wage.

The new Living Wage rates rise to £10.90 an hour across the UK (a £1 increase), and £11.95 an hour in London (a 90p increase). This year’s Living Wage rates have been brought forward in recognition of the sharp increase in living costs over the past year.

The real Living Wage rates remain the only wage rates independently calculated based on what people need to live on. This year the rate increased by 10.1% in the UK and 8.1% in London, more than ever in the Living Wage Foundation’s 11-year history reflecting sharp increases in living costs.

New research from the Cardiff Business School shows that Living Wage workers have benefitted from more than £338m in extra wages over the past year alone, with one in 10 UK employees now working for an accredited Living Wage Employer.

Over the past two years the Living Wage movement has continued to grow, with the number of Living Wage employers more than doubling, and major new Living Wage employers announced during that time including Royal Albert Hall, Aston University, and the Excel Centre. They join half of the FTSE 100 companies, household names like Aviva, Everton FC, Burberry and Lush as well as thousands of small businesses, who are choosing to pay the real Living Wage to provide workers and families with greater security and stability.

There are now also 39 Living Hours employers, including abrdn, Aviva, and West Brom Building Society, going beyond payment of the real Living Wage to also provide a guaranteed minimum of 16 hours work a week, a month’s notice of shift patterns and a contract that reflects hours worked.

There are 4.8m workers paid less than the real Living Wage and 263,000 of them are in Wales. 22% of all jobs in Wales pay below the real Living Wage. Research published last week by the Living Wage Foundation found that over the past 6 months more workers are skipping meals and using food banks than ever before.

Katherine Chapman, Living Wage Foundation Director, said: “With living costs rising so rapidly, millions are facing an awful “heat or eat” choice this winter- that’s why a real Living Wage is more vital than ever. Today’s new rates will provide hundreds of thousands of workers and their families with greater security and stability during these incredibly difficult times.

Sarah Hopkins, Cynnal Cymru Director, said: “Today’s rate announcement will mean that over 18,000 workers in Wales will see their pay increased, providing a vital lifeline for these workers and their families.

We know these are difficult times for everyone, which is why it’s so encouraging to see that the number of accredited Living Wage employers across Wales continues to grow, with nearly 135 more employers in the network than last year including many SMEs and third sector organisations. We are here to support employers in Wales through the accreditation process because we know that paying the Living Wage brings benefits to employers as well as workers.

“Faced with a cost of living crisis in 2022, we knew there was more we could do to help. We wanted to make sure we were doing everything we could to support our colleagues and their families during these difficult times. So, in February 2022 we sought a Living Wage accreditation to ensure our employees were being paid fairly for the work they were doing. With the cost of living continuing to rise, we will carry on reviewing our support for employees which will include aligning pay with the new Living Wage rate.”

Sam, a Living Wage care worker, said: “As me and my colleagues are always saying, care work is not a job you go into if you want to make a lot of money. It’s a job you go into for the sheer passion and joy of working with people. and the desire to help others.

But the brutal truth of it is that as the cost of everything around us increases, wages remain the same, and all the good, passionate and selfless people have no choice but to leave a job we love, because we have families to look after and bills and rent to pay. A rise of £1 an hour means up to £12 extra a day, an extra £50 per week, and ultimately nearly £200 a month. In these turbulent times this means not having to choose between heating and eating. It would provide significant support during the cost-of-living crisis and at the same time, could sway people from leaving the care industry.”

What is the real Living Wage?

The real Living Wage is an hourly rate of pay set independently and updated annually (not the UK government’s National Living Wage). It is calculated according to the basic cost of living in the UK, and employers choose to pay the Living Wage on a voluntary basis. According to the Living Wage Foundation, since 2011 the campaign has impacted over 390,000 employees and delivered over £2bn extra to some of the lowest paid workers in the UK.

About the Living Wage Foundation

The Living Wage Foundation is the institution at the heart of the independent movement of businesses, organisations and people who believe that a hard day’s work should mean a fair day’s pay. We recognise and celebrate the leadership shown by the over 11,000 Living Wage Employers across the UK who voluntarily commit to ensure their staff earn a real Living Wage that meets the cost of living. We are an initiative of Citizens UK.

Only the real Living Wage is calculated according to the cost of living in the UK and in London. Employers choose to pay this wage on a voluntary basis. The real Living Wage applies to all workers over 18 – in recognition that young people face the same living costs as everyone else. It enjoys cross party support.

The UK Living Wage for outside of London from Thursday 22nd September is £10.90 per hour. The London Living Wage is £11.95 per hour. These figures are calculated annually by the Resolution Foundation and overseen by the Living Wage Commission, based on the best available evidence on living standards in the UK and in London.